Pick-up at the hotel & Introduction 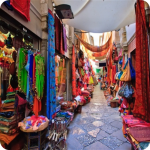 The Albaicín quarter was declared a World Heritage Site in 1984. It is the original core of the town of Granada and still maintains the captivating magic of its Moorish past. A stroll over the district is a `must` for all visitors. The buildings, squares and the very streets will show you how the city has changed culturally and socially over the years. 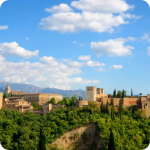 It is located in the heart of the Albaicín quarter next to one of the oldest mosques of the ancient Arab city. It is the most iconic viewpoint in Granada. It offers a complete view of the Alhambra, Sierra Nevada and the city itself. According to former U.S. President Bill Clinton, from here you can see “the most breath-taking sunset in the world”.

Carrera del Darro is one of the oldest streets in Granada, as well as one of the busiest due to its indisputable beauty and historical importance. No visitor should miss a stroll over the riverside, as it allows you to contemplate the imposing figure of the Alhambra at the top of the forests as well as listen to the babbling of the river.